Though my web presence is mainly about trying to help circulate facts about what we the people are doing to our life sustaining Global Heat Distribution Engine (aka Climate).  I do have many other interests, including a life long passion for learning about our planet's incredible four and a half billion year journey of creation.

Recently I spent a few days at the Grand Canyon attending a geology course given by Wayne Ranney and it was such a wonderful experience I wrote a story for the September issue of the Four Corners Free Press out of Cortez, Colorado.  Since they allow me to retain the rights, I want share it here.  I also want to thank Gail Binkly, editor at the FCFP for helping me 'clean up' my writing.

A recipe for creating the Grand Canyon

At 58 I can honestly say that geology has fascinated me for nearly half a century. Those first National Geographic maps and Popular Science stories about Earth's tectonic plates and the Ring of Fire grabbed my young imagination. Within a few years I learned that the Plate Tectonic Revolution could explain the full spectrum of geological phenomena we witness on Earth, from earthquakes to mountain building to precious metals and oil formation and much more.

Though I went to work rather than college, I never lost my fascination for learning about our planet's geological story, that is, its evolution. I've spent the past decades keeping up on the progress of the science through popular media articles, books, plus these days the many excellent academic lectures that are becoming available on the internet's YouTube and other sources.

With that background I was excited to sign up for a three day Grand Canyon Association seminar, "Geology on the Edge," taught by Wayne Ranney at the Grand Canyon South Rim. The GCA's policy of providing free park entry and four nights of camping was a nice bonus for taking the course.

Wayne Ranney is an example of how the Grand Canyon completely captures some people. First visiting the park in 1975, Ranney fell in love with the canyon. Wayne wanted to stay and figured he needed a job to accomplish that goal. His dream was to work down in the canyon close to the Colorado River.

As the Grand Canyon spirits would have it, when he contacted the park's volunteer coordinator, he was told a position had opened "but" it was near Phantom Ranch at the bottom of the canyon. He said, "I'll take it" and was hired on the spot. Later, he found out that 50 others had left their names on a waiting list for that job.

He remained in the canyon for three seasons.

Ranney's curiosity about the formation of the canyon drove him to formal studies at Northern Arizona University, where he received a bachelors, and a masters degree in 1988. Since then he has studied and written about the geologic history of the Southwest and particularly the Grand Canyon and how it formed.
(see: http://www.wayneranney.com).

From viewing some of his lectures on YouTube I knew that Wayne has a gift for explaining complex geologic issues in a way that a novice can understand and I was excited about being able to spend three days learning from him.

As Ranney explains it, there needed to be five things present for the Grand Canyon to happen.

First, the deposition of a thick stack of sedimentary rocks. For that to happen, there needed to be substantial highland mountains, such as our ancestral Rocky Mountains. These eroded away and spilled onto lowlands and open sea basins. A final critical key was that these basins needed to be sinking, thus allowing the sediment to build up into layers tens of thousands of feet thick.

Second, the layers needed to be varied and colorful. This was accomplished because of the constantly changing environment. In particular, there was a lot of deposition in continental environments where sediments take on a wide variety of vivid hues. Sediments would wash off the mountains and be deposited along rivers, in dunes, on floodplains and into shallow seas where levels would fluctuate as glacial-interglacial cycles locked up, then released, massive quantities of water. The varied depositions from different types of dynamic seas and desert dunes experienced over the past 525 million years resulted in today's rock layers of different character and color.

Third, the land needed to be gently uplifted without much folding, keeping layers intact.

Fourth, there needed to be mighty rivers flowing across the landscape, including periods of glaciation when mountains would lock up massive quantities of water that would later melt and send flood waters racing downstream across the plateau surface during which most of the excavation and downstream removal of rubble occurred.

The fifth and final requirement was a modern arid environment to slow down the excavation and preserve the cliffs. As Wayne explained, "It's nice that this area is not covered in a rainforest, but more than that, humid climates tend to 'melt' limestone and other rocks and it's safe to say that if you placed the Grand Canyon in Brazil, it would melt away fairly fast."

Mix all five of these factors together and the Colorado Plateau with it's Grand Canyon is the result.

According to Ranney, who has traveled to over eighty countries across the globe looking for something similar to the Colorado Plateau, there is no comparable landscape.

Interestingly, the nearest rival is less than a thousand miles away in Mexico's Copper Canyon. However, being cut by six rivers that merge within the district, being in a wetter climate, with more vegetation and less variety in its rock layers, Copper Canyon has a very different quality to it. Grand and beautiful, but not the geologic showcase that is our Colorado River's Grand Canyon.

What does this showcase reveal? Only here can we actually see two billion year old volcanic island chains and ancient sea beds that were shoved into the ancient North American continent, buried, heated, squeezed, distorted and metamorphosed by unimaginable forces - then uplifted to be exposed today as the 1,700-million-year old Vishnu Schist down at river level.

Squeezed between the Vishnu Schist and the brilliant horizontal layers of the upper canyon is the easily overlooked "Grand Canyon Supergroup" a remnant from the time a billion years ago when Earth's ancient continents came together to form the short-lived supercontinent known as Rodinia.

Above the Supergroup are the familiar horizontal layers of colored rocks representing the past 525 million years. That is, less than the most recent 12 percent of Earth's history, the time when life finally learned how to organize single cells into complex successful organisms, thus kicking Evolution into a higher gear.

From this student's perspective it's a dizzying dance of continents forming, drifting and colliding; mountains growing then dissolving; oceans constantly fluctuating up and down; glaciers forming and melting; countless cycles doing more than merely repeating themselves. Folds within folds of harmonic cumulative complexity are flowing down the stream of time, relentlessly moving forward one day at a time. Thus with the power of "deep-time" tiny changes accumulated and produced Earth shattering results.

At first it boggles the mind. But, with curiosity-driven study and guides like Wayne Ranney, a sensible pattern does emerge. In fact, together with his mentor Ron Blakey, they are developing the most breathtaking geologic teaching tool I know of, with their series of maps depicting the Colorado Plateau's "Ancient Landscapes" maps that when tied together form a revealing "living map." But, that story must wait for another essay. 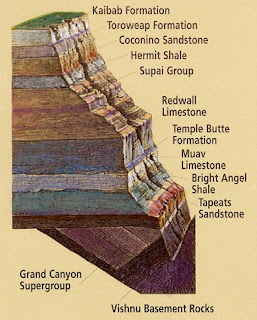 That sequel has finally been written: