Sharing some food for thought:

MPC:  I cannot imagine how transcendence of nature, sublimation, ‘glorification’ can possibly work.

(At the CFI Forum tread: Can Christianity be progressive?

transcendence = “Transcendence is the quality of being able to go beyond normal limits or boundaries.”

I believe MPC is missing the point.  Seems to me, it’s not about attaining some spiritual "transcendent" connection with nature, a la new age, or such.

Deeply appreciating that within myself there are direct roots to achievements hundreds of millions even billions of years ago. Learning about and understanding the outlines of those various folds within folds, that’s emotionally satisfying, so it’s worth it just for that, but there is more.

The transcendence is not the object, it’s the learning and accumulating an understanding of the flowing complexity.

Then as that journey matures the transcendence happens, as a result of all the accumulating mass of facts and learning coming together into a cohesive harmonic whole that makes sense.

I think that’s when the visceral sense of connection emerges. Is that transcendence? I don’t know, but I do know it feels good.

The fun thing is, this emergent holistic understanding affords an inner sense of solidity and belonging that goes way beyond what manmade promises can ever offer, even beyond the confines of my life. Isn’t that what people keep searching for?

(7.03) Being an element in Earth’s Pageant of Evolution

Being able to not just say, but feel that: “I am an element in the pageant of Evolution” - that goes a long way.

Read more »
Posted by citizenschallenge at 11:01 AM No comments:

Yes, you are the eyes of the universe. cfi workbook #5

An exploration into a different sort of perspective on the god ~ human relationship, one that starts with a mind experiment and ends in a beautiful mythical suggestion. 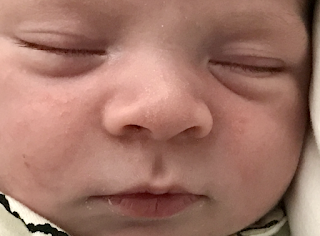 “Humanity is the most exquisite example of God’s need and desire to know itself.”

It begins with imagining creation from a god’s eye view.  If a god there be, what would, what could that god actually know about the universe?

There was nothing to sense in the beginning.  Besides how could a substance-less God sense anything?

Seems to me, only by creating something, was there anything for god to observe.  But what would god observe with?

It occurred to me that god could only experience its own creation, through the structures of that creation.

Starting right at the 'big bang' along side energy, gravity, time and the ever evolving complexity of interactions in a growing cosmos.

Read more »
Posted by citizenschallenge at 10:18 AM No comments:

One of the things I've gotten out of my life long enthusiasm for learning about my human body, my mind/spirit, other people, other creatures and landscapes, Earth and her Evolution, is that my understanding of the traditional Abrahamic God has been flipped outside in.

I came to realize “God” isn’t to be found out there in the heavens. Our “Gods” are to be found deep within ourselves and our evolutionary roots, our DNA being testament to the existence of these roots.  As is our human ego, with its origins going way back into our mammalian heritage.

This evolutionary ground up perspective has instilled an Earth Centrist attitude because this living planet is my touch stone with reality and her evolutionary history informs my day in every way.

Take a moment to consider that we humans, you, me, are actually born out of a parade of generations, before generations.  The number of our grandparents is inconceivable. Try imagining where it all began, from where we are today.  Humanity is a fulfillment of life’s ageless way of striving to improve perceptual, manipulatory and processing abilities, in order to better live a better day.

On a personal level a couple months back I hit upon words that helped me grasp specifically what it was in me that made me such a unique individual. I possess a genuine visceral awareness for being an element in the flow of Earth’s Evolution - and that changes everything about how I perceive today and tomorrow.  Whether by a Creator, or by loaded dice, is irrelevant, either way we are the product of deep time moving ever forward with determination.

I am deeply grateful for being the eyes of the universe - a creature that can reflect on the wonder that is Earth and my own spark of being here within all that majesty. An appreciation for the Pageant of Evolution that goes well beyond the typical mental post card most possess. 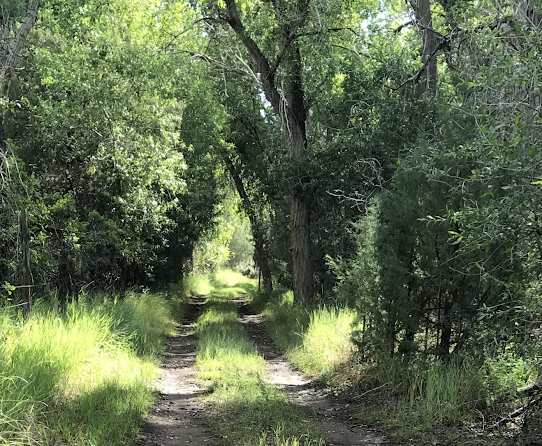 Posted by citizenschallenge at 8:48 PM No comments:

Considering God as a Creation of Our Human Mind. - cfi workbook #3

This comes from a conversation over at CenterForInquiry discussion forum under the far ranging thread headed: Why Did You Choose Atheism?  It’s part of my workshop.

I offered a slight adjustment.

Now if only we really let that lesson soak in, as we think about who and what we are.

As for God, I would suggest that the evidence points to God being the product of our minds. And where did that come from you ask?

Read more »
Posted by citizenschallenge at 9:19 PM No comments:

Comment Rejected… on the grounds that I won’t be a billboard, I’m looking for serious dialogue!

but I will build a response post around it.

Since Mr. Unknown’s missive comes at a good time and I’m in this ‘workshop mode’  I’m going to dissect his allegations as an exercise in explaining my ideas.  He and others are invited to share responses, here or at the CFI Forum.

Mr Unknown writes:  Citizenschallenge, you have been tricked into believing the creator of this earth has limits to what he can and will do.

The “creator” of this Earth is star dust and the work of billions of years worth of physics, geology, biology and cumulative change over time, that is Evolution.

Cc, I used to believe as you do and so started a recycling center in 1974 in N. Calif in southern Humboldt County. I wanted to save the planet but i had much much more to learn and i did.

Yes we certainly have plenty to learn when we’re still green behind the ears - oh but what fun years those were.  Fortunately, usually I took grandpa's advice: “Listen!  Even if you already know it all.  Shut up and listen, you just might learn something.”

You have created your own version of who I am, it does not fit the reality.

Although I’ll admit I know about Humboldt county back in da day: “sinsemilla, send some to me-ia”    ;-).

And okay it would have been nice to be part of helping save our biosphere, the planet will get by.  The global support systems we depend on, not so much.  It’s truly heartbreaking witnessing how horribly self-centered and greedy and self-destructive our generation wound up being.  Even after all we had learned about the ways of Earth.

But, that’s another story.

It took total surrender to the only one who rules heaven and earth.

I didn’t need to surrender to anything, all I needed was to open my eyes and senses to observing, honest curiosity, learning and contemplating nature and Mother Earth.

Observing, acting, thinking, learning, loving it and so on.

It’s amazing how much mother nature can teach those who pay attention, sort of like the Bible told me: “Seek and ye shall find.”  Scientist sure have learned a great deal, we should pay attention to them. 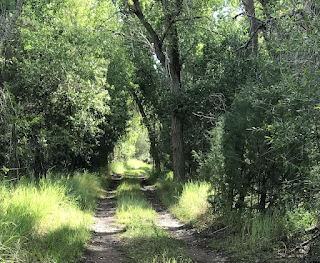 Read more »
Posted by citizenschallenge at 11:46 AM No comments:

Think about it, aren't the Abrahamic religions all about self-centeredness - ours as well as God’s? Worse is their contempt and disregard for the sovereignty of our Earth’s biosphere, her other inhabitants and the reality of our Evolutionary origins.

I’ve one last assignment before I can put the bow on my Hoffman Playing Basketball in Zero-gravity project.  But it’s a challenging topic, easy to avoid and procrastinate, plus I’ve had a very busy summer, still do.

On the other hand, time and experience has been clarifying these fundamental questions most others have also pondered, so of course I want to enunciate and share my perspective, while I'm still around.

I want my final installment to Hoffman's project to be a sharp essay, so have decided to go slow, share the introduction, and basically conduct a personal workshop and hopefully by doing it online, it'll push me to completing the final details in style.

It would be wonderful if some others would chime in, and in fact, I have a thread started over at CFI's CenterForInquiryForum and invite you to share any comments or general thoughts over there.

This isn’t for everyone, but if concepts such as Earth Centrism, Evolution, deep time and Earth as a physical geo-biological entity, resonates, you may find this fascinating.

I’ll wager that if you took some time to think about it, you’d acknowledge that on a fundamental level the Abrahamic religions are all about self-centeredness - ours as well as God’s.

These religions were founded on the basis of self-interest, they were focused on selected kernels of knowledge, born of an aggressive insecurity, and supported by a passionate sense of self-important certitude. Usually with empire building in mind while reeking with hostility towards outsiders, other teachers and learning.  They did achieve results.

All the while pretty much ignoring the sovereignty of our Earth’s biosphere, her other inhabitants and the reality of our Evolutionary origins.

Consider, within the Abrahamic tradition our planet’s life support system and her inhabitants never rise above something to exploit until we suck it dry, then we move on to the next bonanza.

Whereas for me, Earth, her creatures and biosphere, her Evolution, these are my touchstones with physical reality. I feel time flowing through me as I travel through my days. I live within a mindscape that’s filled with an awareness of time in its entire spectrum, from microseconds, to my heart beat, to the days, seasons, years and decades, on to the eons of Evolution.

Read more »
Posted by citizenschallenge at 12:39 PM No comments:

On July 26, the Department of Justice sent out a letter that told ex-trump officials they were expected to honestly testify when asked to, and that presidential executive privilege did not apply to any events related to January 6th attack on the capital.  The following excepts of text comes from: https://s3.documentcloud.org/documents/21017899/doj-letters-to-former-trump-officials-authorizing-testimony-to-congress.pdf 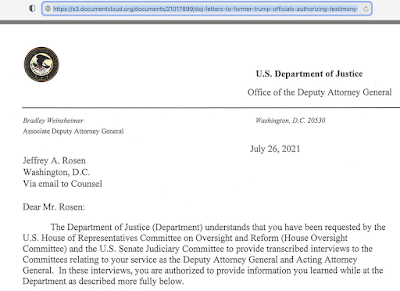 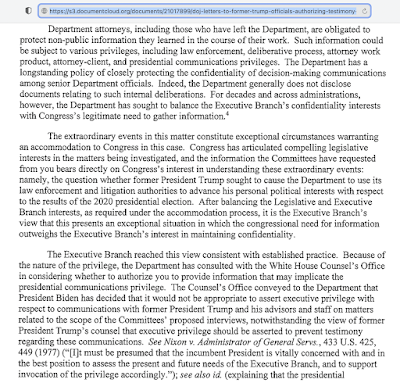 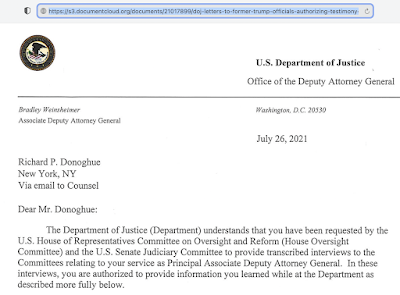 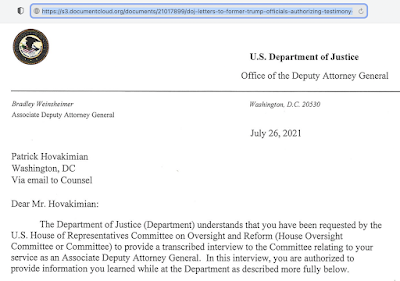 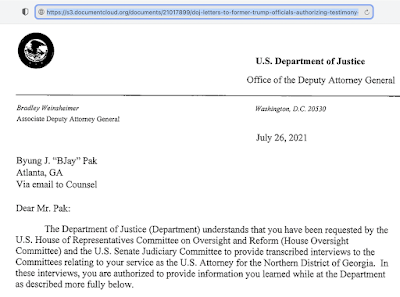 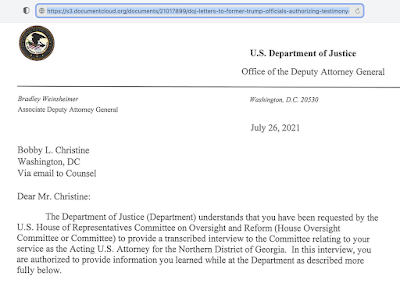 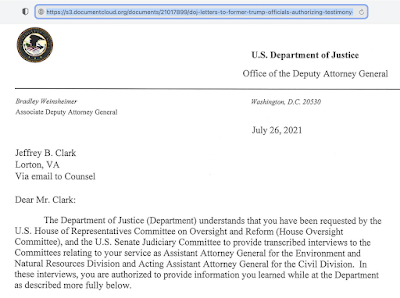 Yesterday the House of Representatives started their hearing into the January 6th insurrection at our Capitol.  It seems something worth noting.
Politico - July 27, 2021

"Thank you very much, Chairman Thompson. Thank you to all of my colleagues on this committee, and thank you to each of the witnesses appearing before us today. It is because of you -- you held the line, you defended all of us, you defended the Capitol, and you defended the Constitution and our Republic, and every American owes you our undying gratitude. Every American, I hope, will be able to hear your testimony today and will watch the videos. The videos show the unbelievable violence and the inexcusable and intolerable cruelty that you all faced, and people need to know the truth."


Posted by citizenschallenge at 9:15 PM No comments: