I came across this a few weeks back and think it's a first class concise index of Peter Sinclair's "Climate Denial Crock of the Week" series.  Best part is that he follows his list with the actual videos.  Heck, it's sort of a collector's edition.

Since the driving interest behind this here blogspot is to share serious information about Our Grand Geophysical Experiment. I feel honored to echo Greenfyre's list of videos over here.

Though first I thought I'd share a little about the man behind this particular blog:
Greenfyre’s 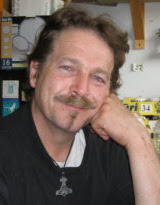 “My heart is moved by all I cannot save:


So much has been destroyed


I have to cast my lot with those
Who age after age, perversely,
With no extraordinary power,
Reconstitute the world.“

Rich’s poem is what it is really about, but I notice people seem to visit this page so I guess I should put something else here.

The blog began as a collection of responses to climate change Deniers (see here for discussion as to how “Deniers ” are not skeptics or doubters) which I found myself repeating over and over on forums and news sharing sites.


{...}
... I do believe that there many folks who are confused as to what the facts are and are sincerely seeking understanding. The Denier drivel may be bunk, but it is carefully crafted bunk and can seem quite credible to those who do not know the facts, so that is understandable.
{...}
Have there been and will there be errors? you bet! I continue to be merely human. If and when I achieve perfection I will alert you to start building the temples.

Until then I put considerable effort into “getting it right” and choose to take pride in how few errors there have been. At the same time I am deeply grateful to “the regulars” who have caught the errors that have occurred and brought them to my attention.

Global Cooling Myths
MYTH: Climate change ended in 1998 aka decade of cooling
Heatwave Edition Part 1
Heatwave Edition Part 2
“1998 Revisited”
Party like it’s 1998
MYTH: Scientist Mojib Latif predicts decade of a decade of cooling
“Birth of a Climate Crock”
MYTH: Sea levels are not rising, or not like they said
All Wet on Sea Level rise
MYTH: 30,000 scientists signed a petition
The great Petition Fraud:
MYTH: Other planets warming prove it’s the sun
Mars Attacks!!
MYTH: Weather stations are unreliable
Watts Up With Watts?
The “Urban Heat Island” Crock
MYTH: They were predicting global cooling in the 1970s
“I Love the 70s!!”: CAUTION: may contain disco music
MYTH: It’s a natural 1500 year cycle
That 1500 Year Thing
MYTH: “The Hockey Stick” is broken
Medieval Warming? (& the Hockey Stick)
MYTH: It’s the Sun &/or Sunspots
Solar Schmolar: Debunking the “It’s the Sun” fable
MYTH: A cold day in ____ proves climate change isn’t happening
“It’s cold. So there’s no Climate Change”
You can subscribe to Peter’s Youtube Channel at YouTube – greenman3610 and get them hot off the editor.

A Natural By-Product of Nature

Watts Up with Sea Ice?

“Birth of a Climate Crock“

“Denial was a River in Africa”

“What the Ice Cores Tell Us”

Creepy at the EPA

Watts Up With Watts?
The latest development:
Climate Crock of the Week: What’s Up with Anthony Watts [take 2]
“The video has since been reviewed by a number of US copyright experts
and (big surprise) there appears to be nothing that could be construed as anything but fair use.”

Sense from Deniers on CO2? Don’t hold your breath….

Debunks the fable that the fact that some other planets are experiencing warming somehow proves that the cause for Earth’s warming is therefore natural.

Posted by citizenschallenge at 11:23 PM

Please be honest enough to post this background information on Greenfyre
Greenfyre is the Internet blog and screen name for a radical environmental activist, Mike Kaulbars from Ottawa, Canada. He is a founder of the Earth First! chapter in Ottawa, Canada, an eco-terrorist organization with a long history of violence and sabotage.

"My experience is that many people are impressed and supportive of the radical militant actions that we do. ...I make no secret of my militant activism, arrests etc; [...]

TxSmiler, interesting comment, I will post it - but with commentary and as a stand alone post.
Too many straw men and red herrings -
I want to review them.

Just can't get to it till after the weekend.

OK Tx, your comment is posted with my response over at: WUWTW but I'll repeat the heart of it.

~~~~~~~~~~~~~~~~~
Really now? How long and just how "violent"?
Is Mike actually implicated in anything serious, besides perhaps arrested at protests? Seems to me your "Eco-terrorist" has the ring of hysteria about it.

Oh and speaking of honesty, when will you be honest enough to acknowledge and examine the "causes" and "issues" Earth Firsters were/are fighting for - in an increasingly apathetic world?

Can you explain why someone shouldn't be an advocate for this Earth, the thing all of us dearly depend on... or don't you appreciate we rely on the good health of our Earth's biosphere and the stability of its Climate engine?

KJ, the way you spit out "eco-terrorist" I can feel your contempt for "ecologists" and "tree-huggers" and such.

Why the hatred for people who have a deep connection with our planet and it's health?
It's as though you still haven't figured out that we humans and our society require a healthy Earth.

You know, American's have a long uneasy respect and acceptance of thoughtful civil disobedience when the cause is important enough.

KJ, are you like some folk who believe only your say should be heard?
You know that's called Totalitarianism and leads to disaster.
Don't you?

I myself still figure this is America, battered though she may be. We're supposed to be a system where we understand that all voices have important insights to share... that is, if constructive outcomes are the goal.

Isn't the health and wellbeing of our life sustaining planet worth allowing some people to consecrate their lives to it's wellbeing? We put up with Priests - why not with "Earth Firsters"?

And why shouldn't Earth's "defenders" be listened to as a matter of practice and policy?

Why does "the corporate way" force them into such isolated corners they feel compelled to take extreme measures to get the simplest message across?