Summary of D.Hoffman's "Case-Against-Reality" - Playing basketball in zero-gravity. A review.

I'm happy to report that after an unexpected extension, my critical review of Donald Hoffman's "Case Against Reality" is complete.  I thought to do more by way of summary, but not getting any inspiration, so I'm done.  Perhaps in a year, providence willing, it'll be fun to revisit and see if I can write an interesting summary.  In the meantime, this will have to do.

PLAYING BASKETBALL IN ZERO-GRAVITY, A REVIEW

Hoffman Playing Basketball in Zero-gravity Review is intended to offer solid information, food for thought, and hopeful inspiration for students concerned with American’s descent into delusional thinking.  It is set up to be easily skimmed, contains copious references to expert sources and reporting, along with a few promising gems.

I've been challenged with the question: "Why am I so "obsessed" with Hoffman’s Case Against Reality?"

It’s a fair enough question.  Why have I spent a half year thinking about it, then nearly another half year and thousands of words dissecting Donald Hoffman’s book, The Case Against Reality, why evolution hid the truth from our eyes?

I’ll tell you why,

* It started with Donald Hoffman boasting that he’s doing serious solid science that is relevant to our daily lives.  When all he’s doing is sophisticated mathematical games, computer modeling, philosophizing, wrapped in just-so storytelling.  But, none of it deserves being called serious science!

* Getting further into the book, I found my Down to Earth sensibilities and my respect for physical sciences increasingly offended by this man’s glib disregard for natural facts as scientists have refined them.

* His dismissal of physical sciences and the physicalist paradigm were as laughable, as they were irritatingly disingenuous.

After all, doesn’t light need to reflect off an object before we can perceive it?  The perceiver composes an impression of the perceived.  How does Hoffman justify such gross distortions of physical fact?

* His constant reliance on computer analogies to answer questions - is reminiscent of an evangelical’s dependence on their own Bible to make their case, such debate tactics are not acceptable for a scientist.

* His constant conflation of Objective Reality and Physical Reality, needs a spotlight.

“Objective” being a product of our minds doing their best to keep subjective human biases out of their observation and learning process.

Thus, science’s dependence on process and measurements; physical evidence and repeatability; facts at hand driving understanding; a community of experts always looking over each other’s shoulders; constructively learning from mistakes; demand for honesty at all levels of communication; and so on.

* His tendency to imply that Evolution has agency reveals a limited appreciation for actual “wet” evolution unfolding one day at a time, over the course of deep time.

* In fact, turns out the only thing Hoffman knows about Evolution, is Evolutionary Game Theory.  (He's never studied actual Evolution.)  Realizing that, made Hoffman’s simplistic sweeping pronouncements regarding Evolution that much more galling.

* Then, his quantum level rhetorical fancy dancing that disingenuously conflates conclusions from atom smasher experiments with our macroscopic day to day reality, was like listening to nails being scrapped across a chalkboard.

* He joined the chorus of talking head$, proclaiming “Space-time and Reality (as we know it) is Doomed,” a mere figment of our imagination.  Why?  Basically because their latest and greatest math breaks down, leaving them with no other conclusion.

* Then to fill in this contrived void, Donald’s imaginative storytelling comes to the rescue with Hoffmanian Conscious Agents that zip around interpreting reality for us, because the reality we think we are seeing, isn’t really there, says Professor Hoffman.  He assures us that he has the math to “prove” it.

Over all, I found his writing to be a type specimen of an author who fell so in love with his own ideas, that he got trapped within his own Mindscape, and lost touch with physical reality.  Which is fine for fiction and the what-if world of philosophizing, but to claim one is representing actual factual reality and science, that’s an insult to intelligence and centuries worth of learning and scientific understanding - and to me.

For me, Hoffman’s sort of delusional parlor games aren’t fun anymore.  Times on this planet are ever more difficult, thanks exactly that sort of mass acceptance of such frivolous flights of fantasy that blind people to our actual evolving biophysical reality, along with crippling their sober decision making ability.

Additionally, Hoffman provided me with an excellent vehicle for wrestling with and further developing my own notions.  That is, a more down to Earth, (that is built upon a foundation of nature's facts), physical reality respecting, Earth Centrist philosophy.

Neglecting fundamental honestly and Earth’s physical reality has set-up today’s ugly destructive vector that humans have strapped themselves into.  I’ve had enough of the delusional thinking for fun and profit and I can’t help believing I’m not the only one.

If any of this resonates with you, please spend a little time skimming through these Hoffman Playing Basketball in Zero-Gravity Review project blog posts.  I’m no genius, not offering any grand solutions, but the contents of this project has much to offer, simply skimming through it like some picture book.  It will feed your understanding and imagination, and help you better formulate and organize your own developing understanding of the way people twist the truth, and what you might do to constructively confront it.

One that’s founded on an appreciation of the Physical Reality ~ Human Mindscape divide.

Alrighty then, with so many complaints, I sound like a big grump.  But the thing is, I can rationally and factually support those complaints.

That’s why it was important for me to challenge myself with thoroughly dissecting Hoffman’s book from start to finish.  I needed to verify and document the deceptions that I found so disturbing.  I’ve now stated my case and provided detailed red flags, specific arguments, evidence, along with further resources, in a fairly organized manner - ready for review and response.  Being a non-academic I know this project leaves plenty of room for improvement, but I’ll leave that to others with a stronger background.

I invite debate, but even more importantly, I want to offer this as a ‘Student Resource regarding Rhetorical Deception’ for those with whom these concerns resonate.

I’ve no idea how many hours I put into it, all told, it’s in the hundreds.  At 65, with an eventful, makes me smile, life under my belt, I managed the spare time to devote to this project.   My historic perspective makes me believe and hope that it might be helpful to some sharp activists and students of political deception.  Students interested in better understanding the rhetorical arts and their tricks of the trade.

These chapters can also serve as the template for any number of class projects.  You are encouraged to share, so long as you respect including citations and original sources.  As for my words, use 'em as a springboard, it's all ideas for the sharing and mutual learning, make 'em yours.

I want young people to think about intellectual confrontation, challenging, and striving to change minds while waking up, informing, and engaging your own chorus, in the process.  A healthy democracy demands an enlightened and engaged citizenry.

Who would those students be?

Students who want to learn more about the ways of rhetorical deception for fun, and profit, and power.

Students who love Earth and who understand, plus respect the scientific method of studying and learning about our Earth, and our own bodies, and lives.

Students who are fed up with delusional thinking, driven by fraud-based belligerent willful ignorance.

Students who want to be part of confronting the normalization of lies and deception, and who rather encourage a return of respect and appreciation of the need for honesty and truth in learning and public dialogue.

Students who want to push back and demand that honestly facing the facts, is the best way to go forward on this rapidly changing increasingly hostile shrinking planet.

Unless we are changing minds, we are losing.

Cc’s Students’ Study Guide for The Case Against Reality.

A critical review of, The Case Against Reality:  Why Evolution Hid The Truth From Our Eyes, by Donald Hoffman, ©2019, W.W.Norton Company

We propose that selection favors nonveridical perceptions that are tuned to fitness. Current textbooks assert, to the contrary, that perception is useful because, in the normal case, it is veridical. Intuition, both lay and expert, clearly sides with the textbooks. We thus expected that some commentators would reject our proposal and provide counterarguments that could stimulate a productive debate. … (HSP)

(3.02)  Barton Anderson - Where does fitness fit in theories of perception?

(3.05)  Jacob Feldman - Bayesian inference and “truth”: a comment on Hoffman, Singh, and Prakash.

(3.06)  Chris Fields -Reverse engineering the world: a commentary on Hoffman, Singh, and Prakash, “The interface theory of perception”.

(3.08)  Rainer Mausfeld - Notions such as “truth” or “correspondence to the objective world” play no role in explanatory accounts of perception.

(4.01)  Rainer Mausfeld: ‘Truth’ has no role in explanatory accounts of perception.

(4.03)  The Case For Reality: Because Apparently Someone Needs to Make One

(4.04)  Sabine Hossenfelder: in Defense of Scientific Realism and Physical Reality

(4.07)  Can you trust Frontiers in Psychology research papers?  Student Resource

(4.08)  Critical Thinking Skills - In Defense of Reality - A Student Resource

(6.02)  The Other Side of Mark Solms PhD, farmer, vintner, humanitarian.

(7.03)   Being an element in Earth’s Pageant of Evolution

The bottom line, courtesy of: 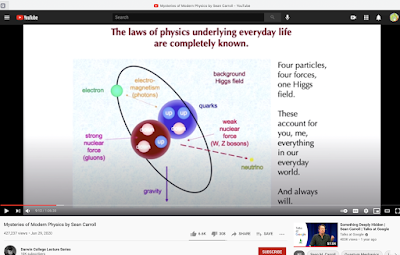 . . .  these are the particles that make up you and this table and me and this laptop and really everything that you have ever seen with your eyes touched with your fingers smelled with your nose in your life.

Furthermore we know how they interact with each other and even better than that, the most impressive fact is that there will not be a discovery tomorrow or next century or a million years from now which says you know what there was another particle or another force that we didn't know about but now we realize plays a crucial role in our everyday life.

As far as our everyday life is concerned by which I really mean what you can see with your eyes touch with your hands etc we’re done finding the underlying ingredients. That is an enormous achievement in human history one that does not get enough credit, because of course as soon as we do it we go on to the next thing.

Physics is not done.  I'm not saying that physics is done, but physics has understood certain things and those things include everything you encounter in your everyday life - unless you're a professional experimental physicist or unless you're looking of course outside our everyday life at the universe and other places where we don't know what’s going on. …

The Mind as a Complex Mathematical System with Emergent Properties, Daniel Siegel

A Scientific Explanation of the Human Mind | Daniel Siegel

Consciousness: here, there and everywhere?  Giulio Tononi and Christof Koch

Gut bacteria and mind control: to fix your brain, fix your gut!

Some Elements of an Evolutionary Theory of Perception

Ecological approaches to perceptual learning: learning to perceive and perceiving as learning

The Essential Elements of an Evolutionary Theory of Perception

The evolution of early symbolic behavior in Homo sapiens

The Evolution and Fossil History of Sensory Perception in Amniote Vertebrates

Evolutionary Psychology and the Emotions

Intrinsic Multiperspectivity: Conceptual Forms and the Functional Architecture of the Perceptual System

Ch.17. A Hierarchical Model of the Evolution of Human Brain Specializations

Posted by citizenschallenge at 11:54 AM