Please consider this typical example of the standard operating procedure of Steven Bannon and the Alt-Right political army he’s put together.

Quoting the LeftExposed.org: "Michael E. Mann is an atmospheric science professor at Penn State University, a climate catastrophe advocate, and a militant campaigner against scientists who disagree with him. He is most famous as the creator of the discredited and controversial “hockey stick graph,” which has been discredited by statisticians for distorting past climate history and offering outlandish predictions of future carbon-dioxide-induced global warming. ..."

The thing is, in no way has the "hockey stick graph” been discredited.   Click on "outlandish predictions" to see how things are shaking out.   At the end of this post I offer information specific to the "Hockey Stick" graph.

Can't get around it, ignore it maybe, but it's happening baby.  That article continues to gleefully spread complete malicious lies, about a matter of utmost importance to our children and the world we are bequeathing them.  Why does everyone seem okay with that?  Where's the moral outrage?

Repetition and willful gullibility has allowed this lie to be generally accepted by the incurious.  The author's only intent is to unjustly demonize an accomplished and respected scientist’s quality career, in order to avoid dealing with the implication of the knowledge we have at hand.  Mann has earned decades of respect from his knowledgeable peers, that’s not a conspiracy - that’s the man doing outstanding work.  None of it perfect, but nothing is perfect.  It’s all a learning process that's constantly refining what is known.  Truth matters!

Now our new President's top advisor and one of two people (besides T's brass...) responsible for Trump's coup, this Bannon has displayed utter contempt for the truth.  As the years go by what will Trump voters think as they start waking up to those lies.

To get back to that example of lying to the readers about Dr Mann and his paleoclimate graphs.

For over eight years I’ve been challenging climate science denigrators and fabricators of their Alt-Realty to a constructive debate regarding Dr. Mann's "hockey stick graph" and what it tells us about past and future climate.  Along with how that paleoclimate work ties in with other aspects of climate science.

Not one climate science denigrator has been able to stand up to a fair weighing of the evidence in defense of their endless malicious slander re Dr. Michael Mann.  It's no surprise, but that others don't care that they are being lied to, that's frightening and now we shall see where that inattentiveness will take us.

The few debates we've started have invariably degenerates into distracting non sequiturs, self-certain attitudes that feel comfortable ignoring available evidence.  There's no interest in understand our planet.  Then come the personal insults and with a parting shot of being labeled an idiot, my debate mates disappear.  Sometimes to slander the hell out of me from the comfort and safety of their hermetically sealed echo-chamber.

Scientists aren’t conducting any fraud.  Its t's Alt-Right conducting a horrendous fraud and Americans seem for the most part to be okay with it.  Hasn’t this election proven that we need many more people actively defending what we believe in and trying to rationally discuss it with others?

After all, the Alt-Right is actually one small extremist group, misleading many groups of frightened hurting Americans who are actually way more rational and friendly and willing to listen, if only the "left" "liberal" rationalist crowd could manage to put together relatable and understandable arguments.

I started this post with but one tiny example of the abject disregard for objective evidence that the Alt-Right possess.  As for this lie about “Mann’s Hockey Stick” they never mention the dozens of other studies that reveal the same basic reality Dr Mann's pioneering effort achieved.

Science is about constructive learning.  Alt-Right is about holding truth and evidence in contempt - self-interest is all that matters to this crowd.  Rather than rational arguments and evidence, bluster and bullying is how they make their way.

Unless masses of previous bystanders wake up, get informed, and finally stands up to join hands and take actions on many levels (including protesting the FBI's Director Comey until we learn the full extent of Trump’s business entanglments with enemy foreign nationals.)  NOW before the Electoral College meets.

We won’t turn around history but we will make a statement to Mr. Trump and his Alt-Right cronies that we are going to stand up to them.  Don’t be silly enough to listen to the nice nice pundits and reporters that, all will be okay, they haven’t gotten anything right in a long time!

Be sure, things will get uglier and tougher in direct proportion to the amount of constructive lawful opposition We The People, left, right, middle (non Alt-Right extremists) manage to muster.  Can you help?

The fact is that the Alt-Right who will now be running the US government solves their truth and honesty problems by simply and self-certainly ignoring the validity of contra-evidence and any people or institutions who collect and report on it.  To top it off and quite counter-productively anyone who disagrees with them becomes an enemy.

Their self-certainty, that only they have the truth is horrifying.  It’s an insane way to deal with life, but if you’re a bully around pliable sheeple, hey, it happens.  Even if in the long run it's sure fire disastrous for all but a very few.  How soon we have forgotten the Republican's last great plan Shock’n Awe and blowback from that.  So tragic.  This time it could well be even worse, if masses of people don't speak up.

If anyone cares to take up my Constructive Debate challenge regarding the validity of “Mann’s Hockey Stick,” bring it on!  I'm happy to listen and learn and a try to teach a little in return.

But that can't be done through a Lawyerly Debate, where winning is all that matters, and where truth is disregarded in favor of self-interested showmanship, hostile personalizing and misleading gotchas.

I challenge anyone to engage in a good old honest Constructive Debate.  Where better understanding of the issues at hand is paramount and where both sides are restricted to honestly relating facts, honestly representing their opponents position, and their best interpretations of those facts and position.  It’s not about egos and self-interest.  It’s about increasing knowledge and understanding of competing idea.

For my opening arguments I will allow better informed experts to share some information.  Any rational disputing arguments will be welcomed.

If you don't want to comment here, send me a note (citizenschallenge at gmail)

Nevertheless, here we show, and reference, the facts regarding 'The Hockey Stick' and the argument. 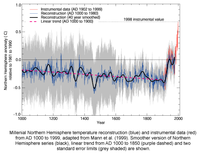 It's a funny thing. As soon as you say something is controversial, it becomes controversial. The scientific reality of the 'Hockey Stick', is completely uncontroversial when you consider the statistical significance of the arguments presented.

As usual, people are taking the science out of context of its actual relevance. The hockey stick is still a hockey stick and still relevant science. It was never removed from IPCC reports. It is a solid piece of a puzzle that shows a serious change in our climate system that is not only human caused, but profoundly impactful on the global economy of system interactions.

The 'hockey stick' is probably one of the most scientifically reviewed items in the history of modern science.

When all was said and done, the mistakes that mathematician Steven McIntyre and economist Ross McKitrick pointed out, to a congressional subcommittee, were 'statistically insignificant' and deemed irrelevant to the overall strength of the model.

What is even more interesting is that you can throw out the MBH 'hockey stick' and still see with all the collected science that the climate is still warmer now than in the MWP (medieval warm period).

What evidence is there for the hockey stick?
https://www.skepticalscience.com/broken-hockey-stick.htm

In September of last year I came across this collection of over three dozen climate studies that examined Earth's climate history from various angles.  Interestingly these studies consistently produce a hockey stick shape graph reflection of what's happened here on Earth.

For the fun of it from https://en.wikipedia.org/wiki/Michael_E._Mann to support my contention that Dr. Mann is a highly respected, quality scientist who has accomplished some outstanding work.

Mann's dissertation was awarded the Phillip M. Orville Prize in 1997 as an "outstanding dissertation in the earth sciences" at Yale University. His co-authorship of a scientific paper published by Nature won him an award from the Institute for Scientific Information (ISI) in 2002, and another co-authored paper published in the same year won the National Oceanic and Atmospheric Administration's outstanding scientific publication award.
In 2002 he was named by Scientific American as one of fifty "leading visionaries in science and technology."
The Association of American Geographers awarded him the John Russell Mather Paper of the Year award in 2005 for a co-authored paper published in the Journal of Climate.
The American Geophysical Union awarded him its Editors' Citation for Excellence in Refereeing in 2006 to recognize his contributions in reviewing manuscripts for its Geophysical Research Letters journal.[62]
The IPCC presented Mann, along with all other "scientists that had contributed substantially to the preparation of IPCC reports", with a personalized certificate "for contributing to the award of the Nobel Peace Prize for 2007 to the IPCC", celebrating the joint award of the 2007 Nobel Peace Prize to the IPCC and to Al Gore.[63][64][65][66]
In 2012, he was elected a Fellow of the American Geophysical Union[2] and awarded the Hans Oeschger Medal of the European Geosciences Union for "his significant contributions to understanding decadal-centennial scale climate change over the last two millennia and for pioneering techniques to synthesize patterns and northern hemispheric time series of past climate using proxy data reconstructions."[3][62]
Following election by the American Meteorological Society he became a new Fellow of the society in 2013.[67] In January 2013 he was designated with the status of distinguished professor in Penn State's College of Earth and Mineral Sciences.[68]
In September 2013, Mann was named by Bloomberg Markets in its third annual list of the "50 Most Influential" people, included in a group of "thinkers" with reference to his work with other scientists on the hockey stick graph, his responses on the RealClimate blog "to climate change deniers", and his book publications.[69][70] Later that month, he received the National Wildlife Federation's National Conservation Achievement Award for Science.[71]
On 28 April 2014 the National Center for Science Education announced that its first annual Friend of the Planet award had been presented to Mann and Richard Alley.[72] In the same year, Mann was named as a Highly Cited Researcher by the Institute for Scientific Information (ISI). In 2015 he was elected Fellow of the American Association for the Advancement of Science, and in 2016 he was elected Vice Chair of the Topical Group on Physics of Climate (GPC) at the American Physical Society (APS).[62]
__________________________________________________________________________

Posted by citizenschallenge at 3:21 PM