There's a website I like checking out once in a while, it's put together by William Hughes-Games off in New Zealand and it's called "Thoughts on the Roof" and it is consistently interesting, thoughtful, at times enlightening, stuff.

Recently he wrote about the an organization called "SkyTruth" including a radio talk transcript from Michael Field that I've been meaning to post since receiving permission from Mr. Hughes-Games.

In case you haven't caught up with it yet, SkyTruth is going to create something of a revolution - a tool for actually seeing what is happening to our world in real time and providing the ability to see  changes over time.  I first heard about it from Michael Field of Fairfax on New Zealand National Radio on Friday the 14th of February, 2014.

He kindly sent me a transcript of the guts of what was talked about so rather than writing it out again, I have pasted it below.  It has been a long time coming since the beginning of the Satellite era but here it is finally. It is worth noting that you can't access it at present because the information is proprietary but this will change some time this year with the launch of a new satellite.

Shock at the scale of fishing in South Pacific

By Michael Field
Fleets of sophisticated Chinese and Spanish fishing boats working the edge of New Zealand’s exclusive economic zone (EEZ) have been exposed by an American volunteer group whose work is creating a revolution to the environmental movement.

Fishing boats create picket fence lines on the edge of the EEZ around places like the Kermadecs and off East Cape, taking bluefin tuna, swordfish and orange roughy.

‘‘Most people would be gobsmacked by what we are finding,’’ geologist John Amos said from Shepherdstown, West Virginia, (pop. 805) where the group SkyTruth operating out of an office behind a draper’s shop.

SkyTruth has been commissioned by the US based US$792 million (NZ$972 million) asset rich Pew Charitable Trusts to monitor what is happening around the Kermadecs, an archipelago 1100 km north of Auckland, home to one of the world’s most diverse marine life.

Pew has supported the Kermadec Initiative which is calling for a 620,000 sq km ocean sanctuary from the existing island reserves out to the EEZ.
SkyTruth use Automatic Identification System (AIS) satellite data transmitted from ships and satellite radar imagery to detect fishing boats that turn off or do not use AIS.

Amos says they find many vessels ‘‘fishing-the-line’’ to catch valuable fish before the stock gets into New Zealand waters.

‘‘Not just around New Zealand, but also in Chilean waters, we see Chinese, Ukrainian and Spanish flag vessel fishing right up to the line.... You see this concentration of fishing effort around the line and you wonder how many of these migratory fish even make it through.’’

‘‘It is like a picket fence of fishermen.’’ Amos said they are producing a South Pacific map that will show the cumulative fishing that has gone on over a 12-month period.

‘‘That is the kind of thing we can do now,’’ he says, adding people will be shocked by what they see.

New Zealand makes some money off the Spanish.

Last November two of the armada ships, Carmen Tere and Artico, were serviced in Whangarei. Their Indonesian crews complained of poor treatment at the time.
SkyTruth in the last couple of weeks has spotted Carmen Tere working a line off East Cape and Artico is on picket duty at the Kermadecs. A fleet of four Spanish ships is gathered in an area of orange roughy fishing grounds. 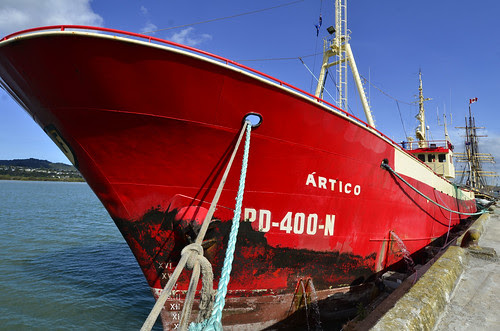 Most of their catches are taken to Papeete, or transhipped at sea.
With a new European Space Agency satellite, Sentinel 1, in orbit next month, SkyTruth expect a ‘‘stream of free radar imagery....

‘‘Clouds of data seems to be what we humans are good at producing these days, and using that is for good purposes.’’

It can identify problems in the EEZs and shows the sheer persistence of the fishing industry.

SkyTruth first came to world attention when the White House used it to work out the scale of 2010’s Deepwater Horizon oil spill in the Gulf of Mexico.

Amos, 50, recently cataloguing the number and size of fracking operations, is a folk hero in the US.

‘‘You can track anything in the world from anywhere in the world,’’ Amos told the Washington Post last year.

SkyTruth’s technology edge was revealed when a 498 ton ‘‘fish transporter’’ Gral pulled into Suva on January 17.

Owned by South Korea’s ‘‘Aururoa Shipping’’ it had been called Arche until December – and before that the tuna longliner Gaia, Oryong No 332 and Sam Song No 507.

On January 20 it sailed out of Suva and made directly for Raoul, arriving at 2.55am on January 23.

Conservation Minister Nick Smith said he had not been briefed on Gral and referred questions to officials who could not provide information on it.
The Ministry of Primary Industries said ‘‘it had broken down and was undertaking repairs’’.

‘‘It appears that the moment they left from Fiji, (Raoul) was the destination.’’
Fuel was expensive and from watching marine traffic SkyTruth saw ships always went the straightest line possible.

A Tauranga ship, Claymore II, under charter to the Department of Conservation, earlier this month found Gral anchored in a bay they would use.

Its owner, Nigel Jolly, said before they left New Zealand, DOC rules required divers inspect the hull for marine life and a quarantine dog was run through.
‘‘After all those precautions we get a permit to go there, but if fishing boat or a visiting yacht seeks shelter at Raoul Island, no matter if it is a reserve, the law of the sea says it has a right.’’

They never found out what Gral was doing.

Bronwen Golder, director of Pew’s Kermadec Initiative, says SkyTruth under-scores the vulnerability of the area and the need for a marine sanctuary.
‘‘What this daily tracking shows is that there is constant international fishing activity just outside of New Zealand’s EEZ over extended periods and in fleets such as the Spanish,’’ she said.

SkyTruth has tracked Gral out of New Zealand’s EEZ and headed toward French Polynesia.

On the high seas late last week it rendezvoused with a Russian fishing boat, the 1137 ton Palmer which had switched its AIS off until the meeting.

On Saturday they remain within five kilometres of each other.
10 february 2014

"SkyTruth promotes environmental awareness and protection with remote sensing and digital mapping technology. We provide stunning images backed by scientifically robust information about our changing environment to stimulate changes in habitat protection, biodiversity conservation, and sustainable resource management. We design and conduct our projects in close partnership with environmental groups, local planners and resource managers to complement their work on a broad spectrum of environmental issues.

SkyTruth’s mission is to motivate and empower new constituencies for environmental protection. We use scientifically credible satellite images and other visual technologies to create compelling pictures that vividly illustrate environmental impacts and provide these pictures and supporting data to environmental advocates, the media, and the public.

SkyTruth envisions a world where all people can see and understand the environmental consequences of human activity everywhere on the earth, and are motivated to take action to protect the environment."
~ ~ ~ ~ ~ ~ ~

http://www.michaelfield.org/SkyTruth.htm
Posted by citizenschallenge at 12:49 AM