Folks like Mr. Watts and David Whitehouse at WUWT, and Pat Michaels, and those editors at Forbes Magazine among others have been plastering the web with contorted reasoning and false statements in ever more desperate attempts to deny the accuracy of climate models and more specifically projections that the IPCC have made in their various reports.

And since I'm sick and tired of liars manipulating the science surrounding something that will so deeply impact our children I feel like offsetting the astro-turfing they have initiated with some references to websites that discuss the actual science behind these claims.  Please if you want a better understanding expose yourself to the rest of the story:

Posted on 27 December 2012 by dana1981
There is a new myth circulating in the climate contrarian blogosphere and mainstream media that a figure presented in the "leaked" draft Intergovernmental Panel on Climate Change (IPCC) Fifth Assessment Report shows that the planet has warmed less than previous IPCC report climate model simulations predicted.  Tamino at the Open Mind blog and Skeptical Science's own Alex C have done a nice job refuting this myth.

December 20, 2012
The WUWT blog has a post by David Whitehouse (of the “Global Warming Policy Foundation”) discussing global temperature data. It features this graph from the leaked copy of the not-yet-completed 5th assessment report (AR5) of the IPCC (Intergovernmental Panel on Climate Change): 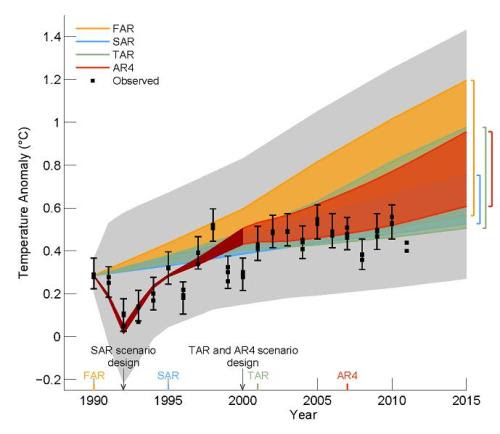 What’s surprising is that Whitehouse spends so little effort discussing the graph itself. Instead, he chooses to paint a perversely false picture of global temperature change.

December 18, 2012
As a skeptic, one of the more important goals to me in our society is to make sure that pseudoscience and scientific falsehoods are adequately responded to and shut down.  Evolution and cosmogeny are the more commonly known ones in the atheist/free-thought community, because of the very strong creationist push against them, the very strong push to legislate intelligent design into our schools.  For me, even more important, and I lament less popularly told, is accurate science on climate change.

Forbes has taken upon itself to do just the opposite of educating its readers.  The outlet published about a "story" (written by Pat Michaels) regarding the leaked IPCC AR5 second draft, a story started at WattsUpWithThat? (I will not link to that website) claiming that Figure 1.4 of the draft (below) shows that the models from the IPCC have overestimated the warming that we have actually observed.

Posted by citizenschallenge at 8:36 AM